5 Tell-Tale Signs You May Be Enabling a Drug Addict 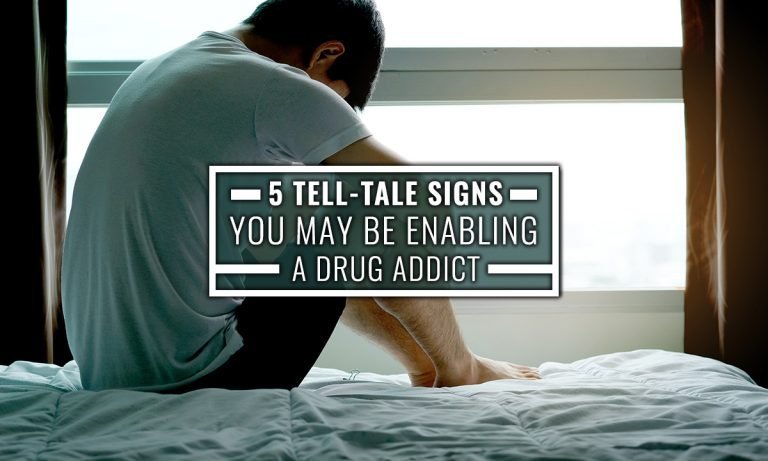 The first signs of addiction are often hard to detect, especially for those closest to those falling into the clutches of substance abuse. Even once the signs of addiction become too apparent to ignore it is difficult to take compassionate action. The dilemma of helping those who are addicted leads many to become enablers of the problem.

Here are 5 signs that one may be enabling addiction and substance abuse.

The initial signs of addiction often manifest as symptoms of other mental health disorders such as isolating oneself from friends and family and losing interest in work or hobbies. Loved ones will often ignore these symptoms and write them off as a passing phase caused by someone feeling “down”.

As the addicts’ disease progress, their symptoms evolve from a decrease in time spent with family and friends into outright avoidance or rejection of the community they once dedicated themselves to.

As addicts begin to isolate more, their potentially dangerous behaviors (driving while intoxicated, spending more time seeking out illicit substances) are continually ignored in the misplaced hope that the addict will soon realize the error of their ways or seek substance abuse treatment on their own initiative. By ignoring the problem, enablers passively condone this behavior making intervention an even more difficult task.

Enablers find themselves stuck between a rock and a hard place in regards to how to take action; on one hand, they wish to intervene in addicts’ behavior while on the other hand, they fear that any action taken runs the risk of pushing their loved one further away. Enablers will often feel as if their emotions are invalid in comparison to those suffering from substance abuse. By not expressing their emotions, enablers are left powerless over the situation and find it difficult to stop their enabling behavior.

This conundrum often leads enablers to take no action at all, by default supporting the addicts’ behaviors. Enablers often have difficulty expressing emotion due to this internal struggle, leaving them feeling as if there is nothing they can do to help besides defending their loved one against what the enabler considers outsiders’ opinions.

Covering Up Their Behavior

It is understandable that families and loved ones would have the knee-jerk reaction to try and cover up the bad behavior of an addict; most people do not wish to have their dirty laundry exposed to outside viewers. However, by calling into an addict’s place of work to explain that they are “sick”, enablers compromise their own principles.

By doing so, enablers get sucked into the role of protecting addicts from the negative consequences of their actions. In order to maintain the status quo, enablers often find themselves lying or taking responsibility for an addict’s behavior. This leads enablers to become defensive, creating an “Us vs. The World” mentality.

Whether they do it through rationalization of dangerous behaviors or direct financial support, enablers take on the duty of maintaining their loved one’s problem. By doing so, addicts lose respect for the enabler and themselves; addicts manipulate loved ones by convincing them that their support is the only thing keeping them from going off the deep end. Enablers have a tendency to act in a paternal manner in regard to addicts.

Cleaning up beer cans, paying bills the addict was formerly responsible for, and loaning them money with no strings attached are examples of enabling behavior. These actions are also ways of obscuring the visible signs of addiction so the addict and the enabler do not have to face the reality of the situation.

As the disease progresses, enablers of addicts become convinced that they are the only ones who can help, thus causing the enabler to further isolate themselves along with the substance abuser they love. Now that the enabler has become the primary caregiver of the addict the enabler’s wellbeing is intrinsically tied to the wellbeing of the addict. This is especially true for spouses, parents, and children of addicts.

If any of these signs of enabling a drug addict pertain to you or someone you love, you should immediately take action and seek help. Al-Anon is a self-help group for loved ones of alcoholics that has helped millions (including this writer) overcome the shame of enabling an addict, learn the difference between helping vs enabling, and how to stop enabling behavior.

Once the enabler seeks help, the next step is to begin to set healthy boundaries with the addict they were enabling. Simple actions such as refusing to cover for the addict or loan them money are great first steps that will allow you to assert some control over the situation and begin the healing process for the addict in your life.

If you or a loved one are concerned you’re enabling a drug addict and don’t know where to turn for help, Oregon Trail Recovery offers supportive and effective drug and alcohol recovery programs for those suffering from addiction and substance abuse.

Take the first step towards recovery by reaching out for more information.